Cockney Slang in Dickens - the Sayings of Sam Weller

Sam Weller is one of Dickens' most flamboyant Cockney characters. It's notable that this archetypal London character should appear in Dickens' first novel, Pickwick Papers. He's full of Cockney sayings and his accent is a bit outrageous.

"That's the pint, sir. Out vith it, as the father said to the child, wen he swallowed a farden."

Sam goes on a rant and apologises: "Beg your pardon, sir, but went I gets on this here grievance I runs on like a new barrow with the wheel greased."

When Sam is asked how his business is going: "Oh, wery well, Sir, we shan't be bankrupts, and we shan't make our fort'ns.

Sam tells part of his life story: "I wos a vaginer's boy, once ... when I wos first pitched neck and crop into the world, to play at leap-frog with its troubles. I wos a carriers' boy startin', then a vaginer's, then a helper, then a boots. Now I'm a gen'l'm'n's servant. I shall be a gen'l'm'n myself one of these days, perhaps."

On sleep: "There's nothin' so refreshen as sleep, sir, as the servant girls said afore she drank the egg-cupful of laudanum."

On how pies are made: "Wery good thing is weal pie, when you know the lady as made it, and is quite sure it ain't kittens; and arter all though, where's the odds, where they're so like weal that the wery piemen themselves don't know the difference. I lodged in the same house vith a pieman once, sir, and a wery nice man he was - reg'lar clever chap too - make pies out o'anything, he could. "What a number o' cats you keep, Mr Brooks", says I, when I'd got intimate with him. "Ah", says he, "I do - a good many", says he, "You must be wery fond o'cats", say I. "Other people is", says he, a-winkin' at me; "they ain't in season till the winter though," says he. "No in season!" says I. "No," says he, "fruits is in, cats is out." "Why, what do you mean?" says I. "Mean!" says he. "That I'll never be a party to the combination o' the butchers, to keep up the price o'meat", says he. "Mr Weller", says he, a-squeezing my hand wery hard, and vispering in my ear - "don't mention this here agin".

Sam's father on how to cure gout: "I've found a sov'rin cure for that. The gout, Sir, the gout is a complaint as arises from too much ease and comfort. If every you're attacked with the gout, sir, jist you marry a widder as has got a good loud woice, with a decent notion of usin' it, and you'll never have the gout agin. It's a capital prescription, sir. I takes it reg'lar, and I can warrant it to drive away any illness as is caused by too much jollity."

On pike-keepers (keepers of toll booths): "Wery queer life is a pike-keepers. They're all on 'em men as has met vith some disappointment in life. Consequence of vich, they retires from the world, and shuts themselves up in pikes; partly with the view of being solitary, and partly to rewenge themselves on mankind by takin' tolls".

The one thing that doesn't appear much in Dickens' work is rhyming slang. Dickens' work, as can be from the very brief sample of speech of Sam Weller, is full of slang, in which Dickens delighted, but not necessarily rhyming slang. Probably Dickens was writing at a time which was just slightly too early for him to have come across Cockney rhyming slang, which seems to have arisen mainly from 1850 onwards. 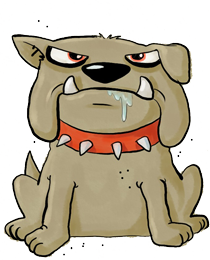